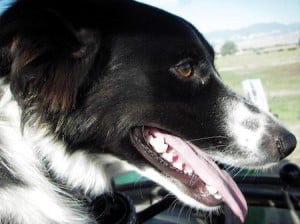 This is Sharda with another Border Collie dog newsletter!

Most people who love Collie dogs also love other animals, and often have a variety of pets in the house.

Even if you don’t have any other animals, you will encounter other dogs, cats and wildlife while you are out walking your Border Collie dog.

It is important to socialize your Border Collie as much as possible, to avoid complications and negative behavior when your dog meets other dogs or other animals.

As with most activities with Border Collie dogs, a bit of advanced preparation can make the introduction much easier and have it be a positive experience for the dog, the other pet and all humans involved.

So, let me get started with the tips, ok?

INTRODUCING YOUR BORDER COLLIE DOG TO ANOTHER DOG

Each Border Collie, like each person, has its own temperament and comfort level with other dogs.

There are some breeds that have been developed to be watchdogs or guard dogs, and they will naturally be more aggressive than a breed that has been bred for other reasons.

If you are planning to add a new dog to your home it is also wise to keep in mind that spayed or neutered animals tend to get along better than intact breeding dogs.

A spayed female and a neutered male will generally get along better than two males or two females.

Keep in mind that a neutered male and breeding female will act the same as a breeding pair, and both dogs can become more aggressive when the female is in heat.

The first time the dogs meet, it should be in a place that is new to both dogs; such as a park or other location.

Keep the dogs on a leash but have them interact with the human they are with.

Introducing the Collie dogs several times before having them play together will allow them to become familiar with each other.

INTRODUCING YOUR BORDER COLLIE DOG TO A CAT

Not all dogs are cat chasers, and not all cats are afraid of dogs.

It is helpful if the Border Collie and cat are introduced when they are young, or that at least one of them is familiar with the other species. Care should be taken when introducing a puppy to a mature cat, as the cat can seriously harm the puppy with its claws.

Likewise an adult Border Colliedog, even a small breed, can easily kill a kitten. Until they are safe together do not leave the Collie dog and cat unsupervised.

Introduce the Border Collie and cat slowly. Crate training the dog can really help as it allows the cat freedom without fear of fighting.

It also allows the dog to become familiar with the cat. Remove the cat litter box and food from areas that the dog has access to.

Not only will the Border Collie dog eat both the food and the fecal material in the litter box but the cat will often start using other areas of the house as a litter box.

Keeping the Border Collie on a leash when in the presence of the cat for the first little while works well.

Don’t be disappointed if the cat and dog don’t actually socialize or play together, as long as they respect each other. Be sure to reward both the dog and the cat when they behave appropriately together.

INTRODUCING YOUR BORDER COLLIE DOG TO OTHER ANIMALS

Many dog owners also have birds, rabbits, guinea pigs or other small animals in the house. While you may be able to introduce your Border Collie to these animals following the steps outlined for cat introductions, it is not recommended that there be interaction without human supervision.

There are some breeds of dogs that get along very well with other species, but most dogs have the hunting instinct.

As dogs tend to react by instinct, when they become excited or scared they may react with aggression towards animals that they have previously interacted with.

That’s it for today!

I hope you learned something from today’s Border Collie newsletter.

All the best and take care.